It's the first week of Dr. Michael Mosley's program, The 8-Week Blood Sugar Diet.  In an attempt to lose the weight I gained due to Small Intestinal Bacterial Overgrowth (SIBO), I will be following the 800 calorie per day diet as prescribed by Dr. Mosley.  You can read my blog to see why I have decided to road test this program.

I have decided to use MyFitnessPal to track my calories.  I will list some meals and the calories calculated by MyFitnessPal as I continue this journey.  I am also using this program and extremely clean eating to support a round of herbal antimicrobials for SIBO. I don't believe I have SIBO again, however as part of my maintenance regime I like to do a round of herbs every few months.  I am at risk of redeveloping SIBO because I have endometriosis and possible lesions from three abdominal surgeries.  Because of this, I keep on top of the condition by being proactive rather than waiting for major symptoms to return before doing anything about it.

I woke up feeling excited and motivated to start this program. Mondays are normally a fasting day so I found the limited calories easy to follow and didn't eat my first meal until 3.30pm.  This actually felt like a treat because I normally don't eat until dinner time on Mondays. I didn't feel overly hungry during the day which was good, but I was conscious that I was on a restricted diet.  To combat hunger, I did find myself drinking lots of water, which meant lots of toilet breaks. I had my first lesson in time management today. I had planned to make a big batch of Ratatouille and serve it with a free-range organic chicken breast for dinner. However, I ran out of time and had a dinner meeting to attend. Instead, I quickly chopped up some vegetables, cut the chicken into strips and stir-fried it.  It was still delicious, but it put added pressure on me, which I could have avoided by being better prepared.

Eating dinner with my friends. They ordered Thai takeaway, and I ate my own food. Stir fry chicken and vegetables. Calories: 496 Success! The scales told me I had lost 0.4kg/0.88lbs but despite my loss, I felt grumpy. I was in and out of the shops today, and realised just how much junk food there is, staring us in the face. It's so rare for me to eat this type of food, but because I knew I couldn't have it, there was a part of me that was feeling really angry that it was off-limits. I also felt angry that food manufacturers have placed this food in such accessible places.  No wonder we are seeing ever soaring rates of obesity. We literally can't turn a corner without being confronted by food.  I knew I was eating out tonight, which left me feeling a little nervous. I didn't like having a will-power test so early on in this journey. However, I remained strong, despite watching everyone else drink alcohol and indulge in delicious food, and instead sipped on sparkling water and ordered a baby snapper with steamed green beans for dinner.

Wow! Today the scales were my friends because they told me I lost 1.2kg/2.6lbs (total loss to date: 1.6kg/3.5lbs). I can put on that much weight overnight, but losing it has always been another story. I do acknowledge that most of that will be fluid, but it's still nice to see the scales going down.  I had only been eating two meals a day so far, but decided to experiment with eating three smaller meals today. I was interested to see if I was more hungry when eating more regularly, or if I felt less hungry.  The verdict: I felt hungrier when I had a smoothie for breakfast in comparison to only eating lunch and dinner. 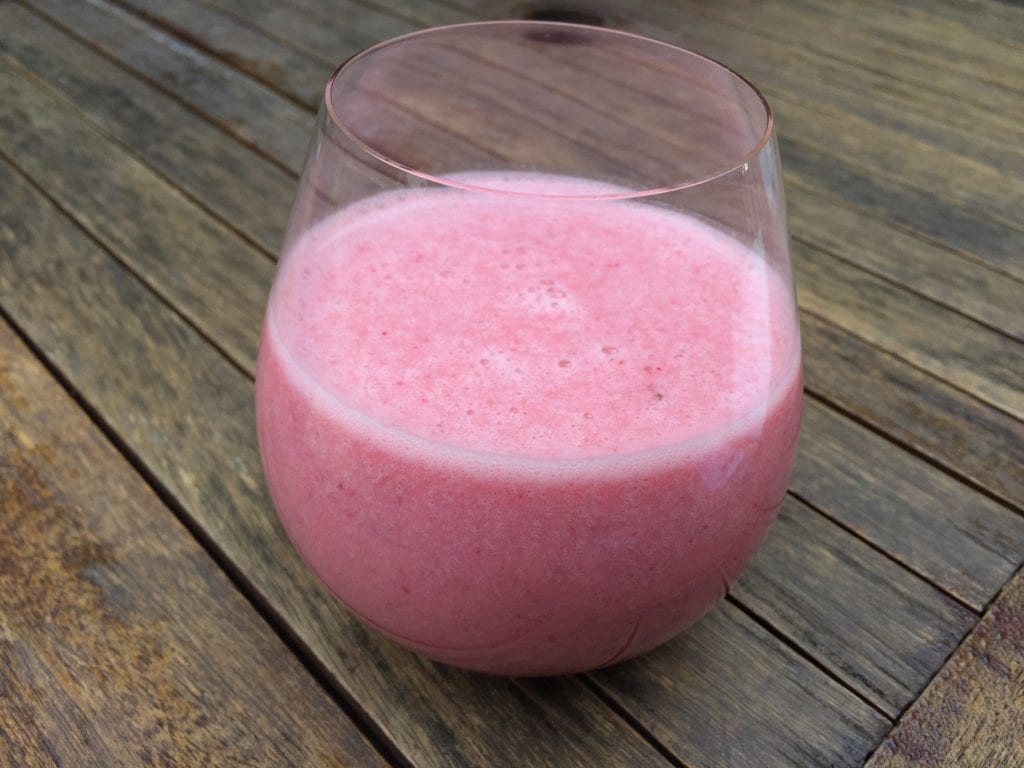 After yesterday's massive loss, it wasn't surprising to see a much smaller loss today of 0.2kg/0.4lbs. What was even more surprising was that my period started, so to see a loss was actually incredible.  Because of my endometriosis, in the pa,st I have put on as much as 2kg/4.4lbs on the first day of my period, so I will take that weight loss and run with it.

I have a regular personal training session on Thursday mornings.  I don't eat before I train, and this morning felt like I could feel my body searching for energy. We did a High Intensity Interval Training (HIIT) session, so my heart rate was quite high at times.  I had one 30 second moment where I felt weak and shaky, but then my body must have tapped into some fat stores (I hope!) and found the energy it needed to keep me going.

I went to the markets after my training session, and picked up some delicious protein: fish, chicken and lean beef.  When I got home, I weighed and packed everything. I wanted to be as organised as I could for the rest of the week. Most of it was going straight into the freezer, with a few things staying in the fridge to be eaten within the next two days. All of the packaging was bothersome for me, as I'm environmentally conscious, but for one week I decided that I needed to do it to stick to the program. I didn't know what was wrong with me today, but I wasn't my normal happy self. I felt cross. I think the gloss had started to wear off and it felt like more of a challenge today.  I didn't lose any weight which was disappointing but not totally unexpected due to my period.  I was also moving into a new house sit, so was packing, cleaning and moving for the first half of the day. I felt hungry and wanted to eat a big, satisfying meal but couldn't, which made me even more cross.  I also drank a banana smoothie for breakfast, which made me ravenous. I didn't sit down to eat lunch until mid-afternoon, and I felt sick with hunger by the time I ate a fillet of trout with a serve of ratatouille.  Because I didn't eat lunch until late, I wasn't hungry for dinner until late, eating at 9pm.  I was tired, grumpy and questioning why I started this stupid diet in the first place. It was only because I knew I was blogging about my experience that I kept going. Today was the hardest day yet.  Whilst I didn't feel physically hungry, I felt mentally hungry.  The scales stayed the same again, and it turned into a major psychological battle with myself to keep going.  After hitting my 10,000 steps target these past few days and sticking to my 800 calories, it felt unfair that the weight had plateaued especially this early into the challenge. Obviously, the sensible side of my brain should have kicked in here and reminded myself that I have my period and that to stay the same weight is actually a huge success.  But that side stayed dormant, and the frustrated teenager side was stamping her feet saying 'it's so unfair'.

At the new house sit, I have 2 dogs and 4 chickens to look after for one week.  I have gone from looking after a small older jack russell to a young energetic giant dog and an older dog. Our walks are so brisk I'm almost running, which has to be good for my metabolism.  I made a shaved carrot, olive and tuna salad for lunch which was not only delicious but very filling. I had dinner out with friends that night and my girlfriend had cooked up the most incredible four-course feast, which I could only admire from afar. I took a small chicken breast and some ratatouille for my dinner, which I cooked and ate when they delved into each taste sensation.  She had made a large jug of sparkling water with slices of orange and mint leaves, so I drank that instead of alcohol.  Every cell in my body was screaming at me to eat her food, but I somehow remained strong and kept thinking of why I am doing this challenge.  If I break now, then I will never know if it's possible for my body to actually lose some of this excess fat I am carrying.

I woke up really tired after a late night. I stood on the scales feeling heavier than other days, so I totally expected to see a gain, but with great surprise saw a loss of 0.2kg/0.4lbs.  If I lost 0.2kg/0.4lbs every day, that would equate to a loss of 11.2kg/24.7lbs over the course of the 8 weeks.  So whilst it might seem like a small amount now, it will add up.  I have averaged a daily loss of 0.28kg/0.6lbs this week so I must remember to keep sight of the bigger picture and that those small amounts will lead to a large amount in the end.

The energetic dog was desperate to go for a walk, so we went down to a local park where I walked laps of an oval, and she bounded around like a mad thing, tongue hanging out of her mouth, having the time of her life.  It was a reminder to me that we need to enjoy the small things in life.  I am grateful that I have a body that allows me to walk briskly in the fresh air with a gorgeous dog who is having a brilliant time.  Because she is so energetic, we ended up out walking for hours, and I hit 18,000 steps.  I made a delicious tuna salad for lunch, followed by a pan-fried fillet of swordfish, paired with some delicious vegetables, care of the veggie garden in this house.  I had dreamt up the flavour combinations, so I was happy when they turned out exactly as I had imagined them.

Dinner: Pan-fried swordfish in a lemon sauce with a trio of vegetables. Calories: 473 On Monday morning it was the weigh-in for the week 1.  I stood on the scales nervously, and to my delight had lost 0.3kg/0.6lbs. That takes it to a total of 2.3kgs/5lbs lost in one week.   I filmed a vlog talking about how I felt the first week had gone. Watch it below.