7 signs that your IBS may be SIBO

This month is Irritable Bowel Syndrome (IBS) Awareness Month and today we cover the 7 signs that your IBS may be SIBO.  So what is IBS and why are we interested in it? IBS can feel like a life sentence those who are diagnosed with it, as they are often told it can only be managed, not cured. IBS is a broad classification for people experiencing digestive discomfort that cannot be diagnosed and is said to affect 10-15% of people in the developed world. In Australia is estimated to affect 5 million people, while in the US, over 100 million Americans are predicted to have digestive discomfort.  People who have been diagnosed with IBS can experience abdominal bloating, constipation, diarrhoea, food sensitivities,  and/or abdominal pain or discomfort. It is twice as common in women as men, typically occurring before the age of 45. In conventional medicine, there is no known cure.

There is, however, light at the end of the tunnel for those with IBS. A relatively unknown condition, Small Intestinal Bacterial Overgrowth (SIBO) is estimated to be the underlying cause of IBS on average in 60% of cases, with one study demonstrating 84% of IBS patients tested positive for SIBO.  So how can you tell if  SIBO may be the underlying cause of your IBS and digestive woes? Check out the following 7 signs that your IBS may actually be caused by SIBO.

Have you ever had to undo your belt buckle because your gut has bloated, sometimes to the extent that you look pregnant? Bloating is a very common symptom of SIBO and is caused by gasses being released by the bacteria in your small intestine, as they ferment and digest your food.

Unexplained pain and cramping commonly occurs with SIBO and can leave you feeling miserable and very uncomfortable.

Have you noticed that you don’t have daily bowel movements? Or perhaps you don’t feel like you have fully emptied your bowels when you have been to the toilet. The excess bacteria in your small intestine can disrupt the regular movement of the bowel, called the Migrating Motor Complex, which can lead to constipation.

At the opposite end of the spectrum, some people experience regular diarrhoea with SIBO because their gut is overstimulated. Not only is this unpleasant, it also makes outings difficult as you are left worrying about where the closest toilet is.

Feeling gassy? This is another common symptom of SIBO. The gasses that can make you belch and suffer from flatulence are created by the bacteria as a bi-product of them eating and fermenting your food. The small intestine isn’t designed to be full of gas, so it needs to escape, often going up or down.

The excess bacteria in your small intestine can result in you becoming intolerant or sensitive to foods. Have you noticed that foods you once ate with abandon now cause any or all of the symptoms listed above? Or maybe something in your regular diet has caused a rash/hives?

Have you ever felt like your feet and legs are full of ants and you want to rip them off or kick them until the sensation stops? Restless Leg Syndrome (RLS) is commonly experienced by people who have SIBO. It is believed that the damage to the gut lining, caused by the SIBO, increases the likelihood of RLS occurring.

So what can you do about it?

An easy first step is to take this free quiz by SIBOtest. By answering a few questions, it will tell you the likelihood of you having SIBO.

From there it’s important to find a practitioner who understands this condition. SIBOtest have a useful Practitioner list, helping you find someone near you in Australia and New Zealand.  Your practitioner can arrange a simple breath test for you to carry out at home, which will indicate whether you have excess bacteria in your small intestine. If the results come back positive, they can then develop a treatment program for you to reduce the excess bacteria in your small intestine while also repairing any damage to your intestinal tract.

Common SIBO treatment options include antibiotics, herbal antibiotics or a specially formulated liquid diet called The Elemental Diet. In conjunction with these treatments, a modified diet is followed to reduce the foods the bacteria love to consume and ferment.

If you'd like to find out more then head to our helpful two part blog on what you need to know about SIBO, Part 1 and Part 2. 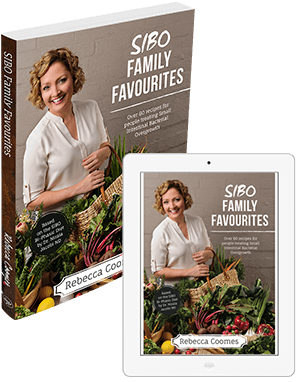 The SIBO Family Favourites eCookbook is crammed full of family-friendly meals that the whole family can enjoy together. All recipes are based on the SIBO Bi-Phasic diet by Dr Nirala Jacobi ND and clearly list what phase they are suitable for.

All recipes are 100% gluten-free and soy-free. There are dairy-free, grain-free, sugar-free and low FODMAP options available.

Order your copy today and choose between an eCookbook or a hard copy one to scribble in, like we do!